And yes, I’m allowed to refer to my mental illness as crazy but no, you are not. Unless you too have a mental illness, and if so, well then, my crazy kindred, I suggest pouring yourself a specialty drink I like to call “The Crazy Kook’s Cocktail” (spoiler alert: it’s wine straight from the bottle) and enjoying the following texts because I’m sure you’ve had to have similar conversations with your loved ones, which are on the one hand extremely sweet because you know they care, but at the same time make you want to throw your wine-bottle-cocktail against a window because AREN’T I JUST ALLOWED TO BE QUIRKY WITHOUT BEING INSANE?!

For context, I have been weaning off my Prozac (with the VERY close monitoring and responsible care of my therapist) so I think everyone around me is on extra high alert. But (remarkably) I feel totally fine. Well, totally fine for ME. I have an innate baseline functioning status of “meh.”

For more context, please know that I did not just wake up this morning and arbitrarily decide to hack off my hair (although if I did, I still don’t think that’d be insane). The decision to donate my hair is one I made over 5 months ago, and I have since been growing it out, itching for the day I could finally make the cut because I was starting to look like a mermaid (the washed-up on shore, tangled in slimy bramble kind, not the Ariel-singing-on-a-rock kind). So while the “do it yourself” aspect was somewhat spontaneous, the intention to lop off almost a foot of hair had been planned for a while now.

Finally, for clarity, I don’t blame Eric for being initially alarmed. (He also wasn’t the only one– I got an immediate text from Zack, and the only reason I didn’t get one from Mom, I’m sure, is because she is golfing/mahjonging/chardonnay-ing and hasn’t seen the post yet). I know Eric’s concern comes from a place of love (and straight up alarm, because he sort of committed to a long life with me– sucka!). But it is a frustrating byproduct of mental illness that if you do something “kinda weird” while feeling good, it’s a sign you’re losing your goddamn mind. 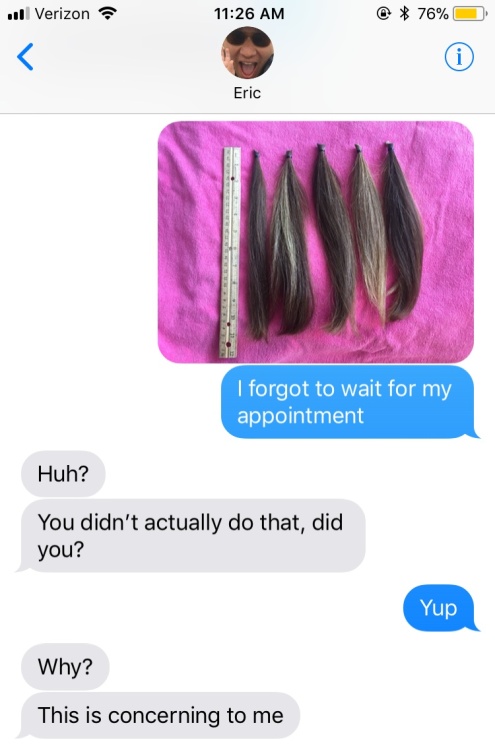 So in the end, all is fine, espeically beause we got to remininsce about Eric’s mullet.

Also, in hidsight and in fairness, I suppose my intial presentation of the situation in that first text was confusing and alarming, but I guess I overestimated how immune Eric is to my eccentricity.

Regardless, in the future, I’d like to spend less time defending my crazy and more time enjoying the fact that what I did was kind of weird, and being weird is awesome. I feel great! 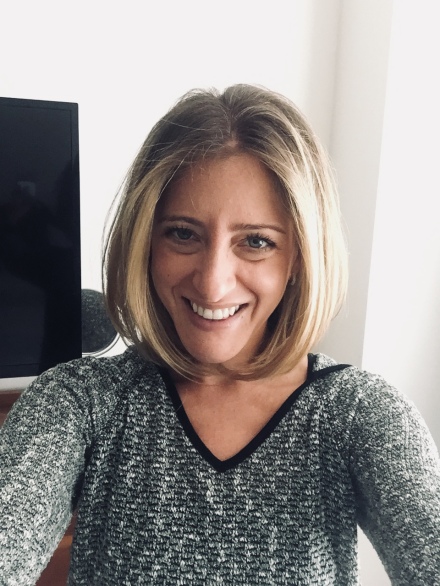 #ShorthairNOWdontcare (thanks to Jose at Aveda Salon, who actually said I did a pretty decent* home job so SUCK IT).

*He reined in the word “decent” and replaced it with “not terrible, and next time don’t” after he saw how excited I was by his compliment.