I initially resisted posting this story because I am legitimately afraid my parents will read it and immediately send someone to come to NYC, pack me up with all my belongings, and bring me home to live in their basement because clearly I have not earned the right to be an adult citizen living on my own in society.

Regardless, here we go. (Mostly because I know they already have a kid in the basement).

On Saturday, I decided I needed a new cocktail dress. I have a couple weddings coming up this summer, and I’m tired of all my clothes and need something new (in this case, “tired of all my clothes” = “I got fatter. Nothing fits.”) I decided this would be a good opportunity to use the $600 in tutoring cash I had stored up in my nightstand (nope, this isn’t even the irresponsible part) and go pay for a new dress in cash.

I grabbed the wad of cash, stuffed it in a jewelry bag labeled “Charm and Chain” that had once held a pair of costume earrings, shoved it in my purse, and headed out on the town (again. Like a hooker).

I ended up finding the perfect dress for $150, because it turns out I’m not quite as classy as I thought.

So I had $450 left when I headed back home with my new purchase. On the way, I passed Wankel’s Hardware store and realized I needed a dust buster because yes, sometimes I clean. (Full disclosure: I recently moved my couch off the wall to try to locate a lost earring, and discovered a mountain of sesame seeds behind it. What can I say, I love a good flatbread. Not exactly sure why I can’t seem to land them in my mouth, though. Eating is hard, guys!)

Anyway, I went into Wankels, purchased a $30 dust buster with the cash, and left.

Fast forward two days later. Yes, TWO days later. It suddenly dawns on me that I never put the bag of cash back in the nightstand. So I go into my purse, where, lo and behold, underneath the Advil, Prozac, chewed gum balled up in wrappers, two sets of headphones (why? I don’t know), 4 tampons, several stray Junior Mints and at least 3 Chipotle receipts there is….nothing.

The bag of money is gone.

That’s not something real humans do in real life. That’s something Phoebe Buffet does on an episode of “Friends,” as the canned laugh track plays because the live audience refuses to chuckle at something that is THAT FUCKING STUPID.

So after breathing into a paper bag for 5 minutes (except I didn’t have a paper bag, so I used an empty wine bottle, and let me assure you that does not have the same effect), I decided to retrace my steps.

I went back to BCBG, where I had to sheepishly say to the cashier, “So this might seem like a crazy question but….did you guys happen to find a wad of cash in a black jewelry bag?”  Needless to say, the impossibly skinny bitch behind the counter was NOT friendly in her response. “Ummmm….NO….”

I walked out, head in hands, sweating, and broken out head to toe in hives.

So I went into the hardware store, swallowed every ounce of pride I could muster (which was a challenge, as I had zero left), and asked the same humiliating question– “Um, this might seem crazy but I came in here the other day, paid for something with cash, and I think maybe I left a bag of cash on your counter. It was in a black jewelry bag. Have you seen it?”

The cashier stared at me wide-eyed. “That was YOU?!”

I could barely respond. “Oh my god, you know what I’m talking about?”

Her: “Yeah, we have the bag in the back.” (then, screaming over her shoulder): “Mike! Jason! Sandra! James! You won’t believe this! The girl who left the cash! She’s HERE!”

Then, faster than my whole family assembles when Dad offers to buy us dinner, the entire staff of Wankles Hardware congregated by the cash register. They stared at me, kind but smirking.

Me: “Hi! Hi yes that’s me. I wish I could say this is the dumbest thing I’ve ever done in my life…but that wouldn’t even be true.”

They all laughed. And then told me how lucky I am. And then, I’m pretty sure, snuck a photo of me that they later posted on Instagram with the caption “Village Idiot.”

After some friendly-but-mortified banter, a burly bearded man escorted me to a shady back room area (where I gleefully followed him, as the tone of bad decision making had already been set) and handed me the bag of cash.

Every single dollar was there.

So there are two lessons here, guys.

1) Be as dumb as you want. Everything will turn out fine.

That’s it. There are no more lessons. 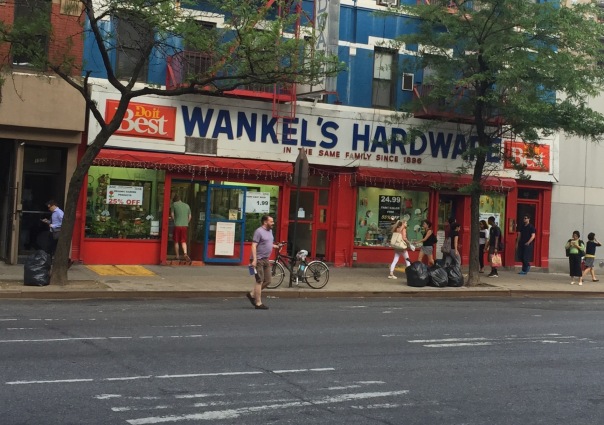