I’ve gotten many comments about my lack of posting lately. Most of you think it’s because I’m too happy and in love to bother writing anymore. HAH! No.

Yes, I love Eric dearly and yes we are very happy together, but that would never be the reason I stop posting. If I’m writing less, that is usually a bad sign. I write more when my energy is good. I make myself write when my energy is bad, too, because it is definitely therapeutic. But you’ll certainly see more frequent posting when my spirits are up.

Jk, you can blame him a little, at least for the blog’s decrease in entertainment value. My pre-Eric dating life was more amusing. For you guys, at least. Living it was bona fide hell.

Anyway, back to the point. Here’s where I’ve been:

I have felt like absolute dog shit for the past 5 weeks. No, not depression (wahoo!), but feeling this awful for this long was starting to make me FEEL depressed, which is when I knew I had to make a change. I was blaming the new Paleo diet (for those of you not familiar, Paleo is essentially a whole-foods diet…nothing processed, no added sugar, no dairy, no grains, no legumes). I had started feeling this way about 6 days into the diet (after an initial first week of feeling fabulous), so I was certain that my body was just transitioning from carb-burning to fat-burning for energy, and it was taking a little longer than normal because I’ve been feeding it approximately 16 gallons of sugar-coated garbage per day for the past 34 years and now it’s like WHAT THE FUCK DO I RUN ON NOW!?!? CHRIST.

So I was just giving it some time.

But weeks passed, and I still felt incredibly weak and depleted. I essentially felt as if I possessed no muscle whatsoever. My arms and legs were extremely heavy, and when I walked, I felt like I was going to teeter over. It hurt to hold things in my hands (even my phone. I HAD TO PUT DOWN MY PHONE, GUYS). I was so irritable I wanted to punch everything in sight, which is less than ideal when you work with children.

But I really didn’t want to give up the Paleo diet, because the switch to this lifestyle had instantly cured my two biggest life-long ailments– headaches and stomachaches. So I kept riding it out, certain my strength would return, as well as my ability to not be a fang-toothed fire monster.

It didn’t. I started crying every day because I couldn’t run anymore. I could barely make it up the stairs to my classroom at school. I couldn’t carry a grocery bag.  Social events made me anxious because I didn’t know how I’d feel. I pushed myself to go to a friend’s outdoor-concert birthday party, only to end up crying hysterically to her when I didn’t have enough energy to stay on my feet.

Nobody likes the girl who cries to the birthday girl. I know that’s not even a thing, but I made it a thing, and I think everyone involved can agree it was not a good thing.

So I had a ton of blood work done. Checked all my vitamin levels, thyroid, cholesterol, blood pressure. Everything came back fine. I started to think I was going insane (you know…again).

I googled everything I could find on issues with pervasive weakness. About 3 hours into my google search, as Eric tried to gently pry the computer out of my hands and suggest I do something productive, like stand up or blink, I came across a testimonial from a girl who had very similar issues. They were related to her birth control. Specifically, she started noticing herself fall apart as soon as her pharmacy switched her over to the generic form of her pill.

This had recently happened to me. About 7 weeks prior, my mail-order pharmacy had sent me a 3-pack of the generic form (Levonorgestrel and Ethinyl Estradiol) of my regular birth control (Aviane). I wasn’t thrilled about the switch without notice or approval, but I naively trusted it’d be the same thing, and I’d be fine. Well, you know how the saying goes– “naiveté killed the cat.” (Yeah, I know, it’s “curiosity.” But that doesn’t fit this context and there’s no good quote about naiveté so BACK OFF.)

I immediately googled “Levonorgestrel and Ethinyl Estradiol.” The reviews and patient testimonials were insane. Basically, women switched to this pill and turned into Medusa. One girl swore it caused her divorce, because she became a completely irrational and emotional lunatic. Another used to be a marathon runner and then found she could barely walk (um, hello?!). Another gained 15 pounds in 3 weeks despite going to the gym every day and being in the most active, healthy phase of her life. Another stopped having sex with her husband because the sight of him disgusted her (that sounded more like a life problem than a medication problem, but godspeed to that couple.) Overall, the pill had a user rating of 1 star (for comparison, the name-brand pill I’d been taking had a rating of 4 stars).

“Holy shit. I’ve been poisoning myself,” I thought as I scrolled through testimonials that easily could have been written by me. I had basically been waking up every morning and swallowing a tiny little dragon pill that turned my insides to mush, my pupils red, and my breath to Game-of-Thrones-worthy fire darts.

I stopped taking the pill immediately. Didn’t even ride out the pack like they say you’re supposed to. Just stopped mid-pack and threw the rest in the garbage.

I quit it last Sunday. By Thursday, I was myself again. My body no longer feels heavy. I’ve been running every day. I have my strength back (not 100%, as I haven’t worked out in 5 weeks, but it is infinitely better). I can walk up stairs and not lose my breath. I can laugh again. I don’t hate everything.

Needless to say, Eric is relieved. 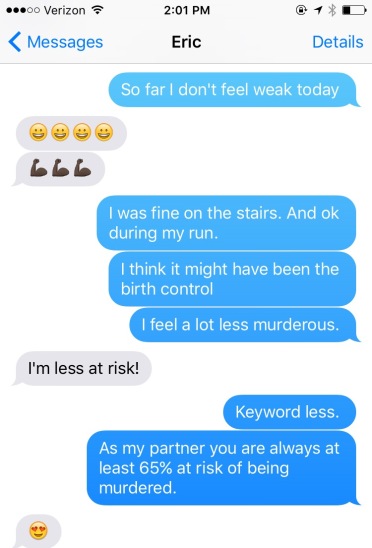 So the point here is four-fold:

Number 4 is very important. Because if you murder your significant other, it should be because that’s just who you are as a person, not because a pill made you do it.

I’m glad to be back! 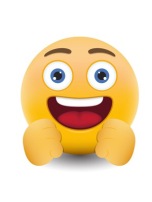