Me: “I’m only going to feed Nora organic fruit, and a wide variety. The more exotic the better. I want her to have a very diverse palate.”

Me: “Street bananas for life!”

Nutrition has really taken a nosedive around these parts.

We ordered a sampler platter from the local Persian restaurant because we were told the hen is delicious. Eric opens up the platter….

— every trick-or-treater. Because lucky for me, kids are dumb.

I am embarrassed to admit that I went against everything I believe in as a chocolate-lover and general knower-of-juvenile-things and purchased the cheapest bag of Halloween candy I could find for our trick-or-treaters. I’m sorry, Society, but $16 for the Hershey favorites variety pack that only included 40 pieces seemed insane (and Whoopers in the pack?! No. NOT a favorite and they should be ashamed to have included them. And don’t even get me started on the Almond Joy. In my childhood I could have fed an entire army on the pile of discarded Almond Joys I threw into the bottom corner of my closet. (“But Emily, if you hated them, why did you keep them in your closet?” Um, because when November 15th rolled around and I had polished off my top-ranked goods by including at least 7 pieces of candy in every meal for 2 weeks straight, I’d then enter the “Desperate Times” phase of sugar withdrawal and creep over to the reject stash in the middle of the night, while the rest of the house slumbered. I never claimed to be sane.)).

So, yeah. I went for the $5.00 generic brand, hoping that kids just won’t know the difference.

Because kids don’t notice when a peanut butter “cup” or a chocolate “bar” looks like it was driven over by a car and then stomped on by an angry little elf, right? And parents don’t mind when the wrapper is slightly torn and insides exposed, as if a mouse had already visited this piece of lesser-chocolate, and even the mouse was like, “eh, no thanks…”?*

Just add it to your “Desperate Times” stash, kids. You’ll thank me later. Like at 3:30am on November 16th.

I’m in the elevator and an elderly lady walks in…

Lady (after staring at me for 10 seconds): “Are you pregnant?”
Me: “No. I am not. And honestly, this is the second time this has happened to me in an elevator and I don’t understand why.”
Lady: “It’s the way you’re holding your stomach. Makes it seem like something’s in there.”
Me: “Yeah, there is. Dairy. I’m Jewish.”
Lady: “Ah. Enough said.” 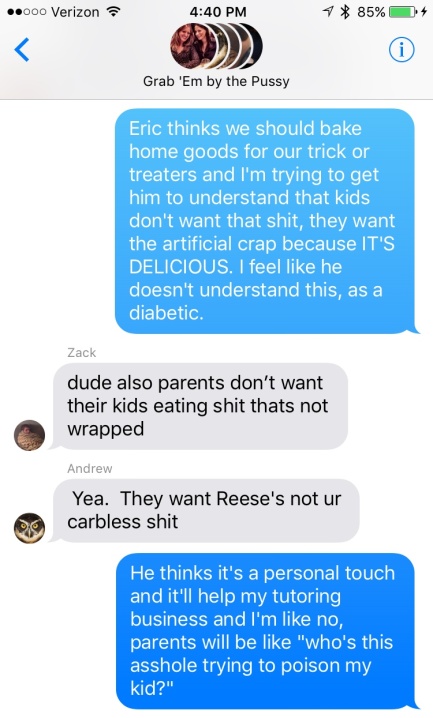 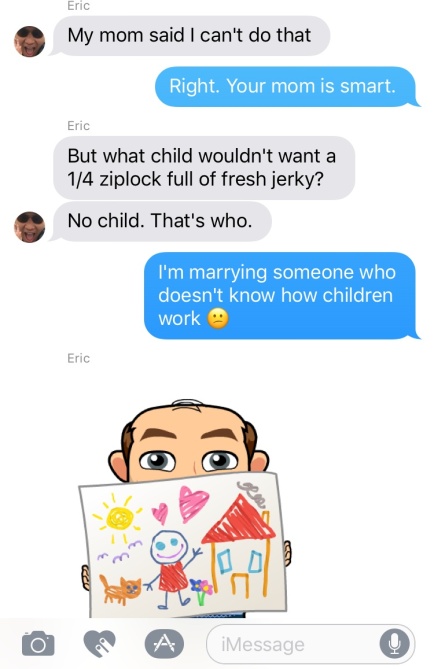 (Part of the Ebola Mom series) 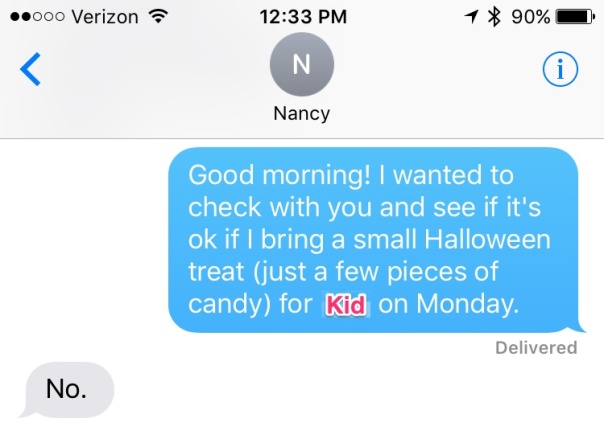 I hand my tutoring kid a small Halloween treat…

Kid: “Oh, thank you so much! But my mother does not allow me to have candy. Should I return it to you so that another child can enjoy it, or would you like me to donate it to the nearest shelter?”

I find this 20 times more disturbing than if she had snatched it out of my hand and shoved it down her pie-hole without a thank you.

The text below refers to the following voicemail (to listen, hit play on the black audio bar) I left for my brother Jeremy on his birthday. I think it is a pitch-perfect, stunning example of why I don’t– and never should– make voice calls. 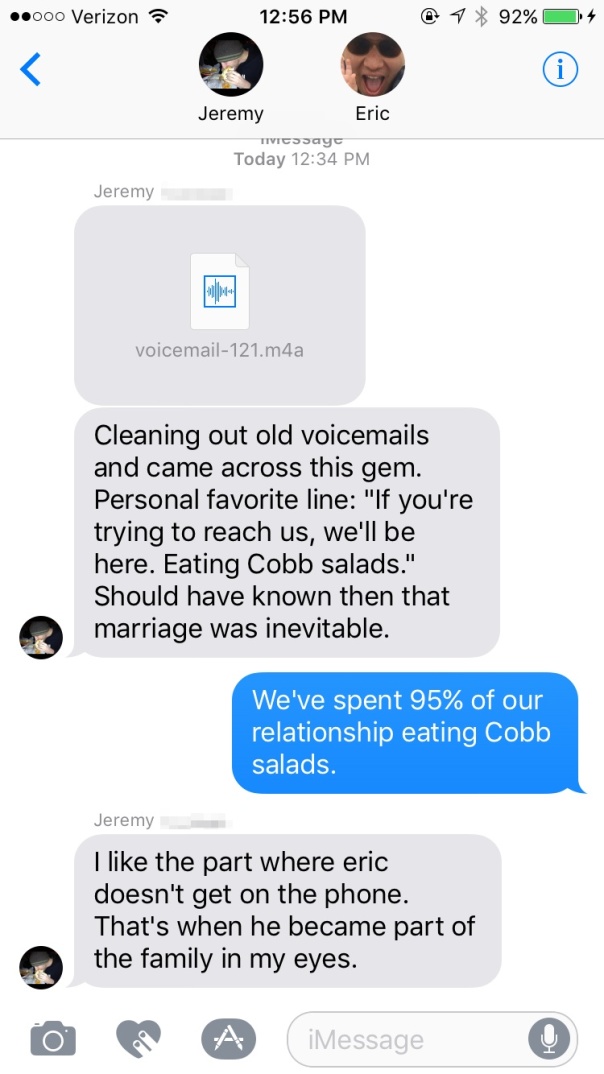