I went to my first prenatal yoga class this morning.

I’ve been having some back pain for the past 2 weeks so various sources, including my therapist, recommended a prenatal yoga class to “open up the body.” I’ve tried yoga twice in the past (over 10 years ago) and didn’t particularly enjoy it at all, but I will always follow my therapist’s advice in the same way Michael Scott followed his GPS into a lake, which is to say that even if my instincts tell me this is not going to be good, I have no choice but to obey the all-knowing robot.

So I nodded as if I knew what “open up the body” even meant, and signed up for a trial class.

The first thing I was instructed to do was put one hand on my heart, one hand on my belly, and send an “intention” to baby. In hindsight I realize that this intention was supposed to be something along the lines of “I intend to love you forever,” but mine was “I intend not to piss on this floor in front of all these people, so get off my bladder.”

That’s when I just sat down and pretended I needed water. Water was in fact the last thing I needed, given the aforementioned urge to piss myself. But I sat there sipping until I increased my odds of a public pants-wetting to about 98%.

The last 15 minutes of just lying back on an incline and breathing were fine, but I sort of felt like I could do that at home, alone, with a huge bowl of egg salad on my lap, like I did last week. 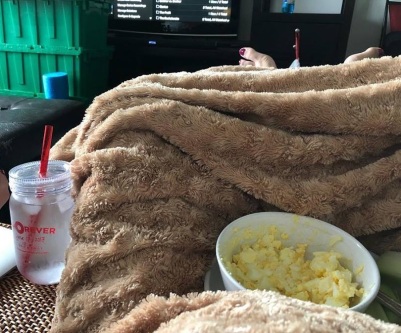 Not sure why I need to add a $35 fee and a bunch of far-more-in-shape-and-confident-than-I pregnant ladies to this scenario.

Bottom line, I spent most of the class feeling anxious and wondering if I was doing everything wrong (which, to be clear, I was). I hear anxiety is the exact opposite of what you’re supposed to feel during yoga. Well, I’ve always been pretty good at feeling the opposite of what one is SUPPOSED to feel, so I guess this falls right in line.

And this is all meant with no disrespect to yogis. I wholeheartedly respect your love and appreciation for yoga, and I hope you are not offended by my distaste for it, in the same way that I am not offended when people tell me that running is boring, horrible torture and they’d rather stab themselves in the face with Satan’s fiery pitchfork than run a marathon. I don’t agree, per se (and honestly, calm the fuck down, you’re being a little dramatic), but I totally get it. Not your thing.

So, Yoga, we’ll just have to leave it at that. You’re not for me. I gave you several tries, I wanted to like you, but deep down I just know there’s something better out there for me. I had that mentality while dating, and I managed to land this guy:

So let’s just say I trust my gut.