Leaving in a couple days for our honeymoon in South Africa…. 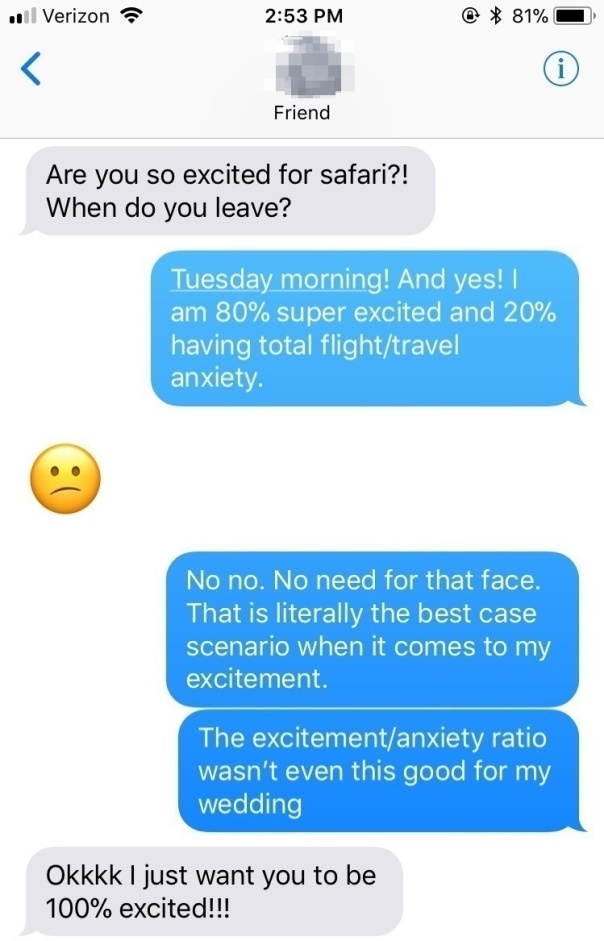 Eric’s flight (to Georgia, not Florida. Apparently.) was delayed yesterday.

It wasn’t. Eric has spent 32 years on earth thinking that airplanes sit on a mat of tar before takeoff.

That moment on a plane when you’re so embarrassed by your overactive bladder that you apologetically explain to the annoyed woman in the aisle seat, who is getting up for you for the 3rd time, that you’re pregnant.

You’re not pregnant. You just know that’ll make her sympathetic and less annoyed. And you’re right. It does.

What you don’t know is that this will incite an entire conversation about said make-believe fetus.

How far along am I? About 3 months. I know. It’s crazy, I’m barely showing. I’m sure that won’t last, especially with the aid of these nacho cheesier Doritos! (Woman cackles with laughter, seems less disgusted with my snack choice than she was previously).

The father? He’s amazing. Been married 3 years. He’s in Florida for business right now, so I’m meeting him at The Breakers. Yeah, I know. Ritzy. But the thing is, he, and therefore we, are richer than God. Sometimes we take baths in our dollars and I wear a bra made of diamonds. Don’t be fooled by the hole in this Old Navy hoodie I’m wearing. In public, I prefer to blend.

First child? No. We have toddler triplets. One boy and two conjoined girls. Yeah, that delivery was rough! (finish bag of Doritos, lick fingers, bust open the Toblerone).

Names? Haven’t decided yet. I like Coconut. Maybe Sunshine. Or Palm Tree. No, I’m not just naming things I’m excited to see in Florida.

Am I sure it’s ok to fly? I don’t know. Why? Is that a thing? Maybe that’s why my girls are conjoined…

(Note: nothing past the 4th paragraph actually happened. Except in my head. This is how I pass time on flights. It’s also the effects of Xanax). 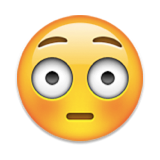 I’m a teacher, so I obviously like kids. But, like most teachers, and many humans in general, I like my kids in a specific context. For example, if you’re my student and we’re in school, I like you. If you’re my student and it’s the weekend, no. If you came out of my sister’s uterus, no matter where we are and what you’re doing— love. If you’re from anyone else’s uterus and coughing on me in a confined space— hate.

So see, there are rules.

One context that never fares well for me and children is on airplanes. I have a bit of travel anxiety (picture Kristen Wigg in Bridesmaids, but with less of a scene and more drugs.)

And yet, I inevitably always end up sitting next to a kid. Yesterday’s  flight back from Mexico was no exception.

The kid was seated in the middle, I was aisle, and Dad was window, reading his iPad and showing no indication that he even knew, much less liked, his child.  So, as children will do when they sense their parent wants nothing to do with them, the kid started in with the “look at me!” behavior.  First, he pointed to the window.

At this point you’re probably thinking, “Awww, that’s just what toddlers DO!”

This kid was at least 7.

It was intolerable. But the “what’s that’s” escalated, and with them, my anxiety levels. At a certain point, I gave up on trying to read my kindle and shut my eyes tight, wishing I was anywhere but there.

And then Dad stopped talking and, flustered, said, “Ok, this game is over. Here, play with my iPad.”

The kid was silent. Praise Jesus.

I opened my eyes and looked down at my kindle. When I had closed my eyes, unbeknownst to me I had rested my hand on the kindle’s surface and inadvertently increased the font size tenfold. On the screen was this:

I guess there were limits on what Dad was willing to name and label.

So thank you, Sarah Silverman. Your foul mouth bought me 15 minutes of blissful, peaceful silence on a packed airplane over the Gulf of Mexico. I’m sure that wasn’t your specific intent when writing those words, but I can’t help but think you’d be pleased with this subsequent outcome.

On a related note, I have a whole new respect for the word cunt.

On the flight down to Mexico yesterday, after taking an extended drool nap that impressed even the flight attendant, who made it a point to greet me when I awoke with a hearty “You’re a very good sleeper for such a small lady!” (I’ve heard this before, and it’s always code for “You snore like a giant diabetic fat man off his meds!”), I took out my laptop to do some writing.

I began writing the story about how, when I was a kid, my mother kicked me out of the car and made me walk home because I was being a jerk in the backseat (more on that in a future post. Sorry, Mom). In my peripheral vision, I could see the guy sitting next to me repeatedly looking up from his kindle and staring at my computer. Pretty much any time I started typing a new thought, he glanced. Quite frankly, it was annoying, but I decided, in the Christmas spirit, to take it as a sign of flattery that he was clearly enjoying my writing, and not let it bother me. I turned to him and smiled.

So the takeaway here is that he loved my writing, but was embarassed that I caught him spying, so he couched his enthusiasm in a bunch of insults.

Also I should learn to type.

And never talk to people.