So last I left you, Nora was doing great but sporting a somewhat funky-looking cyst on the corner of her left eyebrow, at one of the sling surgery incision sites (there are four such sites, two on each eyebrow. The other three sites are completely fine and healed, barely visible). Here’s a diagram of the situation on her left eye, for visual learners:

As mentioned previously, the cyst does not seem to bother her at all (except when we have to clean/medicate it), but the problem with leaving it be is that it is constantly opening and reforming, and every time that happens, it runs the risk of becoming infected. That would be crappy for many reasons. I don’t think I need to explain them.

Plus no one needs a cyst permanently sitting on their face. Life is hard enough.

In a last-ditch effort to get rid of the cyst (we’d already tried various topical steroids and antibiotics, to no avail), the surgeon prescribed an oral antibiotic. He hoped that this would do the trick– if not, it would mean that it’s the silicone sling itself causing the chronic irritation, and so it (the sling) would have to be removed.

So Nora took the oral antibiotic and the cyst went away and we all lived happily ever after because LIFE IS RAINBOWS AND BUTTERFLIES AND UNICORNS THE END!!!!!

You’re on MY blog, not [insert name of someone I’d hate]’s blog.

Life never gets tied up in a neat little bow, so here we are at the next boulder in the road. Get out your chisel. (Is that what one uses to break through a boulder? Listen I’m not outdoorsy nor have I ever used a tool).

The cyst remains. And while we’ve grown so used to it that we’ve considered giving it a name, starting a college fund and raising it as our own, the doctor feels it needs to go. And the only way to do that is to remove the sling (you know, the one holding her eyelid up).

So we have another surgery scheduled for Monday. Yes, this Monday. July 22nd. Because some people go to The Hamptons in the summer, but honestly we prefer the bright florescent lights of Children’s Hospital of Philadelphia, Day Surgery Division.

The doctor seems hopeful that because there are two slings in the eyelid (refer to professional diagram above), the inner sling will be sufficient in keeping the lid up. If the lid DOES droop, to the point where it could affect vision, he will be able to discern that mid-surgery, and we will then have the option of putting in a replacement sling in a slightly different location (all this can be done in that same surgery). The downside to this is that Nora will then have three incision sites in that one brow. And, of course, the chance of another cyst-like reaction at the new incision site.

The good news, again, is that the surgeon seems confident that the one remaining sling will suffice (especially since this was the better, less droopy eye to begin with), and that removing the troublesome sling is not going to affect the cosmetics, or her vision, at all (then why did he put it there in the first place? Standard procedure? Slightly better chance of symmetry with the other eye? IDK guys I guess I missed the day they taught that in the medical school that I didn’t go to).  Furthermore, he feels that if he DID have to put in a replacement sling, the likelihood of a cyst forming again is small, especially since the other three incisions healed so nicely.

His confidence seems promising, and the odds do seem to be in our favor– however, this is only the THIRD time in his TWENTY YEAR career that he has had to remove a sling, so I’d say my faith in odds right now is akin to my faith in Eric’s hair-regrowth shampoo.

Thankfully, Eric remains positive and hopeful (regarding both the surgery and his hair), so I don’t have to. This is a marriage strategy and not an accident. It’s written in our ketubah: “In sickness, and in health, Emily will constantly assume the worst and Eric will keep the entire ship afloat by himself, so help him God. He’ll also get Emily iced coffee and egg salad and never comment on how much she’s sweating.” It’s all there in Hebrew. 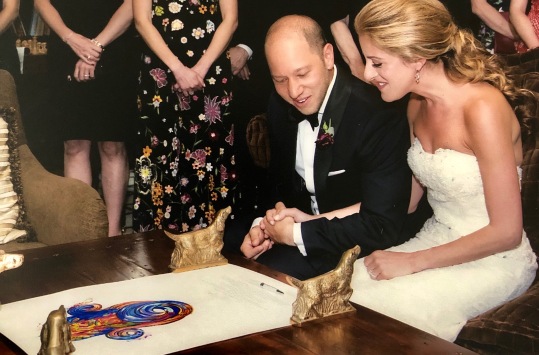 So that’s where we are. One of the four silicone slings will be removed on Monday. The surgery is slated to take 120 minutes, from prep to finish. I will eat my feelings next to the hospital’s frozen yogurt machine, which likely still has my chicken-nugget-greased fingerprints on it from February. Eric will wander around introducing himself to various dogs.

Nora, I assume, will handle it better than both of us, because she’s still zero years old and life is just a series of eating, pooping, and maniacally swaying to Queen:

And I’m sure all this hardship will make Nora stronger, and it will all work out in the end, just like it did for Freddie Mercury.

No, I’m kidding. Obviously. I DO believe this will all be fine, I’m just sorry my sweet little tater tot has to go through this. AGAIN. I’m not necessarily confident that this is the last time we will deal with this issue, but I AM confident we’ll be able to look back one day and this will all seem like a distant memory and a minor roadblock. I know that day will come, because, no matter how hard life has been at any point, and no matter how hopeless things have seemed at any  given moment, a good dose of distance and perspective has always made the value of the struggle seem crystal clear.

But right now it’s surgery-anticipation mode, so I’m sorry, I’m just not there yet. But I will be.

And until then, I’ll cope in same way any other loving, caring, fiercely devoted mother would.