That moment when you know so little about cooking that you have to google image search the kitchen-related engagement gift someone sent you so that you call it the right thing in the thank you note.

Partly inspired by a scale that told him he gained 9 pounds in the past week, and partly due to my constant complaints of feeling fat, Eric convinced me to try a “Paleo Restart” 30-day program with him.

Even though he discovered this morning that the scale was wrong (um, obviously. 9 pounds in one week? #science), and despite the fact that I didn’t actually want to DO anything about feeling fat, I just wanted him to respond “That’s crazy, you’re not fat! It’s fine to eat that 9th Hershey Nugget!” (um, obviously. #science) he’s still super into the program. Plus, we already paid the $35 for it. So fine.

I went to sleep last night totally on board to start this weekend, but then this morning had a horrifying realization. 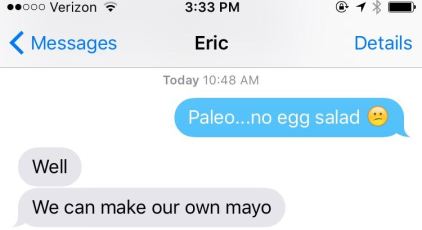 Oh, yeah. Why didn’t I think of that?

PROBABLY BECAUSE I DON’T KNOW HOW TO MAKE EGG SALAD, MUCH LESS MAKE THE FUCKING MAYO FOR EGG SALAD. 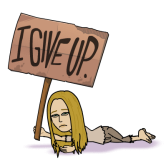