As I’ve mentioned on this blog and to anyone I’ve ever met anywhere at any time for any reason– I’m a sweaty person. Like this but sweatier.

Our current apartment runs extremely hot. We’ve posted many a video of Nora on social media and she is always stripped down to the diaper– friends think this is because we have a “free the baby from the burden of clothes!” hippie attitude, but what they don’t realize is that I, too, am naked behind the camera because it is 5 fucking thousand degrees in our home and WE’RE ALL JUST TRYING TO SURVIVE. (I’m sorry if that mental image of naked me ruins your enjoyment of Nora’s videos (Brothers. Dad.), but you’re welcome if it enhances it (No one? Oh ok.)).

So due to this hot apartment/me being a sweaty mammoth combo, I need to sleep with the air conditioner on throughout the night. In fact, the AC isn’t even enough– I need the fan too. Eric, whose body functions like that of a person meant to live on this earth and not in a 70-degree isolated space bubble, does not enjoy this nighttime freeze-out ritual. He insists that if we just keep the window open, it will have a similar effect, with the added bonus of saving both money and energy.

I have tried this crazy window-scheme he’s concocted, and I simply disagree with his assessment. It’s not the same. He then tries to argue that I have not given it a real chance, as if me doing it that whole one time for 10 seconds isn’t sufficient enough to draw an accurate conclusion of NOPE THIS IS TERRIBLE HELLFIRE AND I HATE IT.

So, like any good, solid married couple with opposing viewpoints, we have agreed to compromise and have the AC on full blast, the fan on high, and the window sealed shut.

Eric, over time, has learned to accept that this is the situation, and has ceased to verbally comment on it anymore, as he knows, much like when he tries to teach me about the stock market or how to make toast, it is a waste of breath. I am who I am ( unadvisedly Set in my ways.)

But what he DOES do is passive aggressively send me the monthly email from Con Edison explaining how much energy we waste use compared to other homes. It is, without fail, always over 150% more than similar apartments in the area. He sends these emails with no explanation– he just forwards them along and hopes I’ll open one and, you know, feel something.

He does make sure to follow up when he gets home from work, though. The conversation goes something like this:

I don’t know why he bothers.

But guys– today’s email really got me. See below. 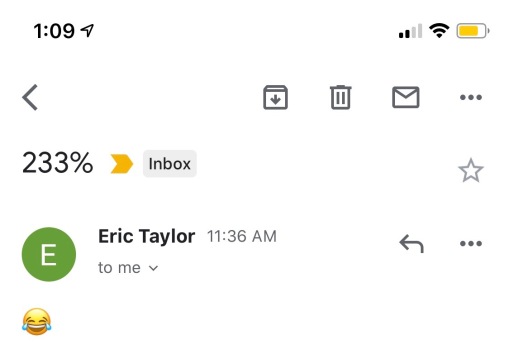 Maybe it’s that the percentage is over 200 for the first time ever. Maybe it’s the fact that Eric took the time to deliberately change the subject line to 233%, so I can’t earmuff that shit. Maybe it’s that he added the “I give up on you and life” cry-laugh emoji. Maybe it’s that image of a polar bear floating away on a block of ice (not sure if that directly relates, but goddamn that’s upsetting). Or maybe it’s that gif I once saw of a dog so sad he can’t even muster one ounce of excitement for what has to be the largest, most wiggly bubble ever (completely unrelated. Now I’m just spiraling.) But the point is, for the first time, I felt something.

So tonight I turn over a new leaf.  If I can’t be motivated by Eric’s discomfort (oh, you don’t like the temperature? Remember when I grew a human from scratch, stored it amongst my organs, and then carried a farm’s supply of lactose in my boobs for a year? I’M SORRY YOU’RE COLD.), I should at least be motivated to serve the greater good.

So you win, Eric. No more winter AC.

But make no mistake– I’m doing this for the dog.

Last year, while on our annual family vacation in the Outer Banks (moment of silence to mourn the fact that we will be missing this year’s trip, which of course makes us sad but it’s obviously for a very good reason– so my vagina can be torn in half), Eric stumbled upon these two ducks in a novelty store. 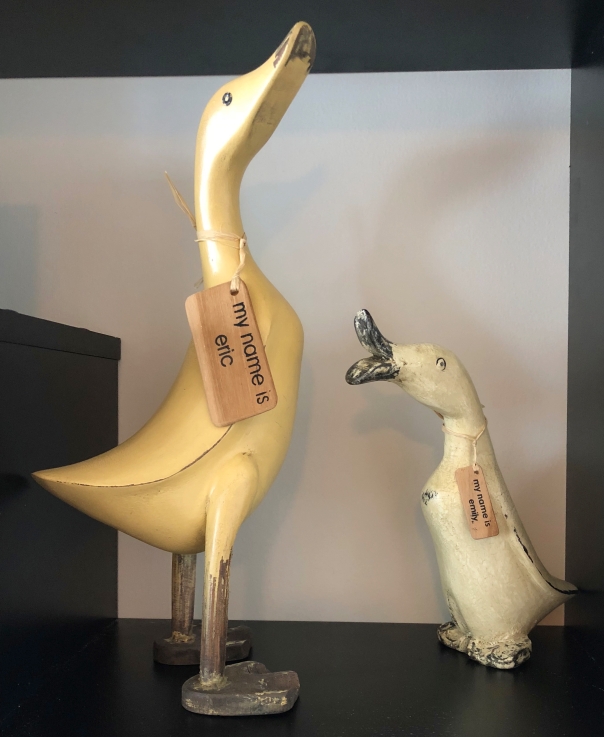 Not sure if I’ve mentioned this before (every third post), but Eric loves animals. Obsessed. The obsession is mostly focused on dogs, but he really does not discriminate. Just yesterday I was forced to watch a minutes-long video of a kangaroo on a golf course, sniffing a ball and then slinking away, which elicited a slightly amused chuckle from me, and a maniacal cackle-giggle from Eric, who couldn’t help but repeatedly yell, “I mean, just look at him hop! Look at him! Hoppin’ away like a little hoppin’ machine!”

So he came across these ducks last year and, as you can imagine, absolutely could not in any way control his excitement because a) THEY’RE DUCKS! and b) they happen to have our names. Without even thinking to look at the price tag he grabbed them and declared, “This probably goes without saying, but we need these.”

Now, sometimes I am wiling to be indulgent of this animal addiction, such as last week when I purchased this giraffe toilet paper holder for our bathroom and named it Jaben, after our South African safari guide, for no other reason than I knew it would make Eric smile and think of me with gratitude every time he sits on the pot, which is important in a marriage.

Other times, such as when he purchased this Corgi welcome mat without my knowledge, 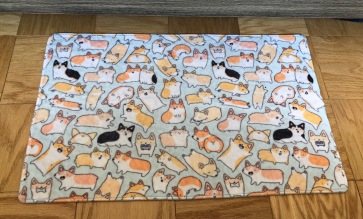 , I threaten to burn the product should it be anywhere in my direct line of sight (rug has since been moved from front door entrance to his side of the bed, halfway tucked under the bed frame. I can technically still see it when I use the bathroom or clean the bedroom (once a year) but placing his feet on that rug first thing every morning makes him so happy that I don’t quite have the heart to burn it, so it stays. For now.)

As for the ducks, I took one look and said, “We really don’t need more clutter in the apartment.” He stared back at me, expression blank, and then, after 30 seconds of careful contemplation, formed his astute counter-argument: “BUT THEY SAY OUR NAMES!”

I was not convinced, and reminded him of the concerted effort we had been putting into de-cluttering our tight living space, already occupied by a ceramic hedgehog, a camel carrying a dowry, three llamas (two from Abu Dhabi and one Peruvian, and may god have mercy on your soul if you can’t tell the difference), four elephant figurines, a life-sized corgi pillow, and the aforementioned corgi mat.

“Ok, ok, you’re right,” he conceded. So I gave him a warm smile and soft kiss on the cheek to show appreciation for his sacrifice, directly after which he walked up to the cashier and purchased both ducks.

So fine. Now we have these ducks.

But ever since bringing them home, something has bothered me about them (like, aside from the fact that we have the world’s most unnecessary wooden birds taking up our tight, NYC living space), and I haven’t been able to place my finger on it. Then yesterday, almost a year after purchase, I finally figured it out:

Yes, those were the name tags they were wearing in the store, aka the names the artist thought were accurate and appropriate for each duck. But if you look closely, you’ll see this was a classic mix up.

The one wearing the Emily tag is a short, stumpy, spry little yapper. Literally has NO LEGS. Its lips are open, chatting away, likely about something related to a dog walking by or an hours-long, in-depth retell of “the weirdest dream I had last night.” Eyes are open wide with wonder, like it can’t wait to discover what the day will bring– a kangaroo on a golf course? A corgi playing in a puddle? A squirrel having a good scratch? THE POSSIBILITIES ARE ENDLESS!

This duck is clearly Eric.

Meanwhile, who is this excitable little Eric duck yapping away to, and clearly being tuned out by? (And to be clear, it’s not a purposeful, spiteful tune-out–  this lanky duck is clearly involuntarily stuck in a thought-loop, berating itself for something embarrassing it did 12 years ago and wondering if the gaggle of geese who witnessed the transgression are still talking about it).

That’s right, this long, chicken-leg-limbed yet too-large-footed figure is clearly Emily duck, staring into the abyss, silent, minding its own business and probably confused about something. If you look closely, its dark, beady little shell-shocked eye screams inner panic attack and the stiff, craned neck says “Hi, I am uncomfortable.” This duck is also the color of pee, which more literally represents what I spend half my time needing to do.

So I switched the name tags and now all is right with the world. 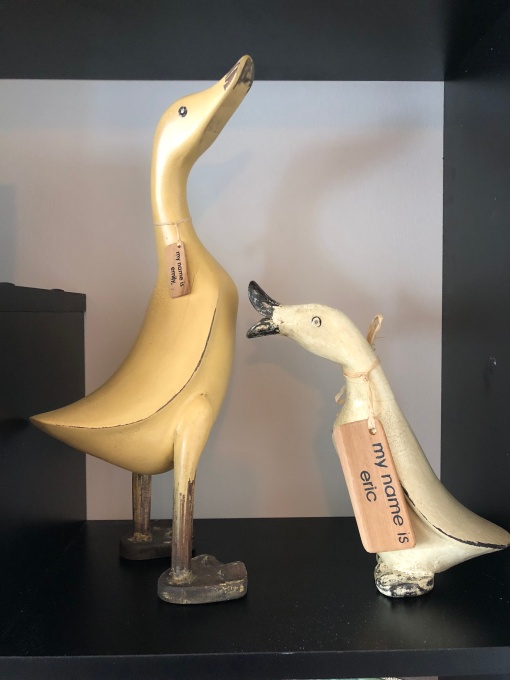 Best purchased we* ever made.

*we = really 100% Eric, against my will, but now that I’m amused by them, I will take half credit for their discovery and purchase because MARRIAGE.

Eric: “…and also at 1pm? My friend just invited me to play at his club.”

Me: “Sure babe, whatever you want!”

Eric: “You’re the best.” (rolls over, goes to sleep with smile on face)

Me: (Opens laptop. Logs golf hours to be paid back in diaper duty, on secret excel sheet created day after taking pregnancy test, to be presented to Eric during labor).