There is an old cantankerous man who lives in our building, and every time he walks into the elevator and sees me on my phone (which is always), he makes a snide comment about it. Normally I just smile awkwardly and sort of ignore, but today I decided to defend myself.

Old man: “Those things are ruining people. Nobody talks to each other anymore.”

Me: “Actually, I met my husband on my phone.”

Old man: “You mean you were talking on the phone when you met him?”

Me: “No, I literally found him BECAUSE OF my phone. I was in an elevator like this one, and instead of talking to people around me, I was scrolling through a dating app. I came across his profile, read it, and I liked it, so I connected with him and we started talking.”

Me: “Right, so, if I hadn’t been looking at my phone, if I had been talking to people around me instead, as you always say I should be doing, then I wouldn’t have found my husband.”

Me (smiling, resisting the urge to literally pat myself on the back): “Thank you.”

(We both step out of the elevator and into the lobby)

Old man: “The whole world’s gone to shit. This girl met her husband INSIDE A PHONE! Like a ROBOT!”

I just spotted Eric’s wedding ring on the nightstand…

Eric: “You wrote in your anniversary card that you love when we go splitsies. When have we ever split the bill?”

Me: “No, I meant, like, when we can’t decide between two main dishes– so you get the steak and I get the duck, and we split each dish. You know, splitsies.”

Eric: “So basically you love that you get to sample all the food that I pay for.”

It sounded cuter in my head.

That moment when the guy you’re dating asks you to please stop referring to him on your blog as “the guy I’m dating.”

That romantic moment in a relationship when your iPhone automatically connects to his WiFi.

Last night, over a glass of wine…

“So I have to confess something. I had never seen Friday Night Lights until I met you.”

— guy I’ve been dating for 2 months, who, ever since we met, has pretended to be a long-time fan of the show because he has the same first and last name as my favorite character and I was SO excited about it (admittedly WAYYYY TOO excited. He really had no choice but to lie). 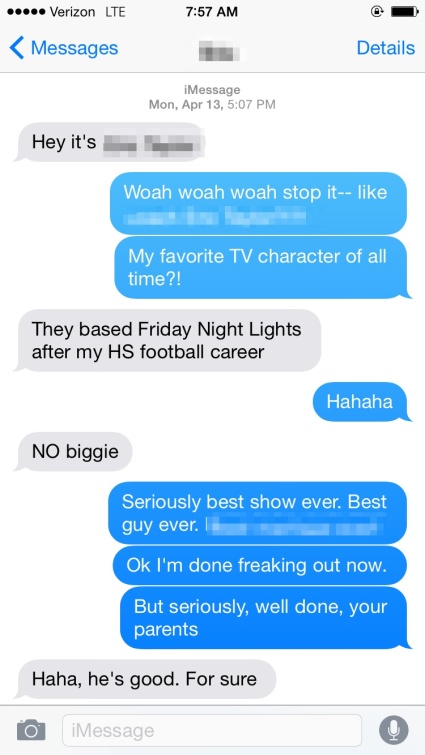 He has spent the past 2 months secretly watching the entire series for the first time. Just finished it last night.

That moment when you’re away for the weekend and a guy you’ve been dating randomly texts you a photo of him and some chick canoodling on a balcony watching a sunset, so you spend the next 20 minutes analyzing why the fuck he would send this to you, and how you’re supposed to respond, and what the hell is wrong with him– with ALL men, really.

Then you realize the chick in the photo is you.

(Continuation of The Guy Who LARPed )

The second time I went out with the LARPer (because oh yes, there was a second date), he showed up wearing what can only be described as shower shoes. You know those blue, waterproof Adidas sandals you wore in the shower at sleep-away camp, that by the end of the summer would be completely worn in, torn, slightly moldy, and smell like garbage?

I don’t even usually notice men’s footwear, but I swear to god these were emanating a stench that rocked me to the core. I thought about them the entire night.

I still thought about the shoes as he chewed with his mouth open and told me he doesn’t own a credit card (“Why would I?” he asked, as bits of cosmo-soaked guac flew from his mouth into my eye).

I thought about the shoes as he told me about his best friend, Leonard.

Leonard is a cat.

But mostly I thought about the shoes as he walked me home, stopped at my awning, and tried to kiss me goodnight. The doorman happened to be standing outside. He caught my “For the love of god, help me!” signal, but rather than doing so, he leaned against the wall of the building and essentially pulled out a bag of popcorn and a fountain soda.

The scene was as awkward as they come. He stopped and clumsily fished for my hand, which I attempted to hide in my pockets– only to discover, regrettably, that I didn’t have pockets. Then he went for it. I did the half turn, letting his lips land simultaneously on both my cheek and mouth. This had happened one other time in my life– when I was 13 and ran into my 60-year-old rabbi at the mall. We each went for the wrong cheek and ended up weirdly half-mouth kissing. It was mortifying and terrible.

But in this moment, I found myself missing Rabbi Weinberg.

Post-“kiss”, he attempted to say something, but I giddy-up U-turned for the door and ran inside. Literally. I ran. I ran like there was free Chipotle and I was…well…me.

“I can do MUCH better than that kiss, but the doorman was killing my mojo.”

Oh, LARPer. Everything about you was killing my mojo, including your use of the word mojo. You literally could not have made yourself any less attractive in the past 3 hours, and no girl with any self-respect would even think about responding to this text.

I think we only went out one more time after that.

So, this happened last night.

And you’ve all been asking what his reaction was.

That moment when you’re on a 6th date with someone, and you’re wondering how you should tell him about the fact that you have a blog about dating (slash mental health…slash teaching…slash family…slash most details of your everyday existence). So you resolve to tell him soon, but first you want to go back and delete any weird posts he might be referenced in.

That subsequent moment when, as you’re thinking all this, a guy sitting at the next table from you and your date leans over and says, “Hi, sorry, I don’t mean to interrupt, but I think we went to high school together. I read your blog!”