Half my day is spent connecting Eric with his friends. 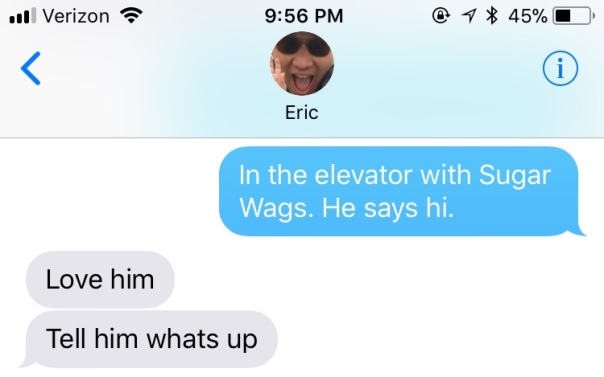 Sugar Wags is a black lab. 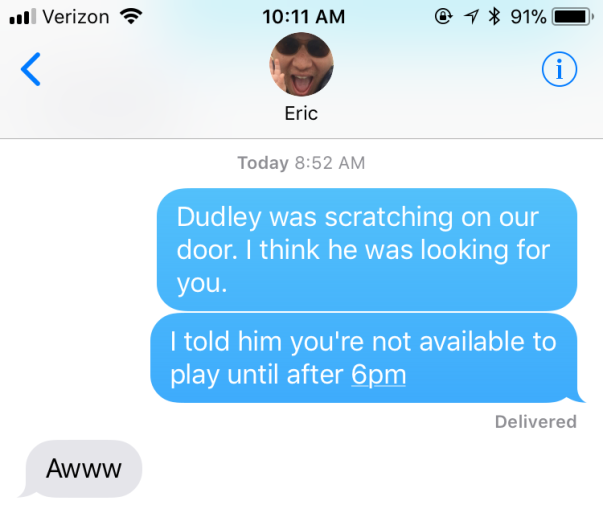 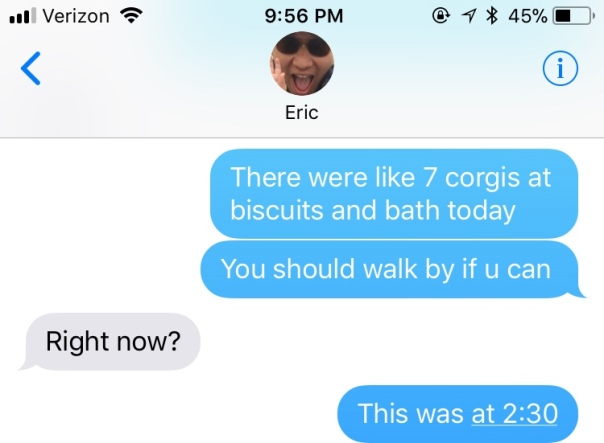 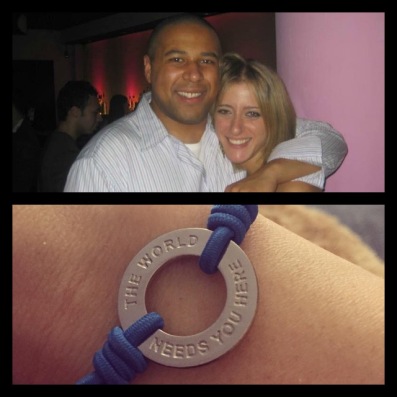 Four years ago, Ari Johnson, an incredible human being and dear friend, took his own life. On this anniversary of his death, here’s a little known story that I’ve never shared publicly, but think about all the time, particularly on this day.

It’s no secret that I struggle with my mental health. There were certainly incidents throughout my childhood that indicated an issue, but my first semester as a freshman at Penn is when things really started to spiral out of control. I was on my own for the first time, and the anxiety was skyrocketing. I cried all the time and felt completely and utterly alone. My sister Steph was a junior at Penn at the time, but she was spending that first semester abroad in Australia. I certainly had some friends on campus who I had known before college, so I wasn’t actually alone– but my god did I feel that way. Because that’s what depression does.

Ari was a very close friend of Steph’s, and a senior at the time. I had met him dozens of times when I was a high schooler visiting my sister at Penn, and he was the best. Just a super chill, friendly, funny, laid back guy. The first week of my freshman year, his fraternity, TEP, had a party, and he told me to come by and bring all my friends. I gathered the acquaintances I knew and headed over to the “TEP Deck.” It was a crowded mob scene, as first-week-of-college parties tend to be. Ari saw me and told everyone to move the hell out of the way and let his friend Emily, and all her friends, come in. It was absurd but fantastic– and at age 18, yeah, it made me feel super fucking cool.

Ari totally took me under his wing that first semester while Steph was away. He could see that I was kind of struggling, and wanted to be the surrogate older sibling in the absence of my sister. This was certainly not his job, but he made it so. Because that’s just who he was.

I started confiding in Ari more and more as the weeks went on, because he was one of the few people on campus I felt I could relate to. While he never explicitly said it, I sensed a darkness in him. An underlying, inner battle. There’s a certain kinship that exists among people with mental health issues– we can sense it in others, even when they haven’t sensed it yet in themselves. Something about the conversations Ari and I had led me to believe that deep down, he was struggling, too.

But I never asked. I didn’t feel it was my place, and I sensed he probably didn’t want to discuss it.

Words cannot express how much I regret that.

About a month into freshman year, my anxiety and depression began to take the form of bulimia. I was living each day grasping at strings, and bingeing and purging was the only method I had for feeling in-control (the ultimate irony, because nothing says “out of control” more than eating a meal for 5 and then shoving your finger down your throat). By the second month of college, I was making myself throw up 3-4 times a day.

One day I just grew weary. Shortly after a purge, staring at my bloodshot eyes in the mirror, I got so damn tired of carrying this secret. It was at that moment that Ari sent me an instant message (remember those?!) asking me what’s up. I responded, “I think I might be bulimic.”

I told him everything. He responded with immediate, genuine concern, and told me I needed to get help at the student health center. At the very least, he said, I needed to tell my family. That’s when I panicked and tried to backtrack. I didn’t want my family to know. I didn’t want to disappoint or worry anyone. I just wanted to tell Ari so that I could get it off my chest– but really, I was fine.

I was 100% not fine. But I tried to downplay what was happening. I told Ari it wasn’t that big a deal, I was just having a bad day, this was all under control. I begged him not to tell my sister. By the end of the conversation, I was sure I had convinced him that a little bulimia was not really a genuine health concern, and that I’d be fine.

But Ari was no idiot. And he had too much heart to sit back and do nothing. He did exactly what he should have done– he told my sister. And then, immediately after telling her, he told me that he had told her. And that was the first step in my realizing that this was a real problem, and that I needed help.

Knowing that I now had no choice but to take action, I immediately confided in another friend of mine, and she took me to the student health center. It was the first time in my life that I had ever been evaluated for the state of my mental health. Needless to say, I did not pass. I was diagnosed with severe depression and anxiety. The doctor was amazed I had made it this far without doing something truly drastic, seeing as though I was waking up every day hating myself and feeling so utterly alone. I was put on medication and set up with a doctor for talk therapy. I have been in treatment ever since, and can’t even fathom where I’d be today if I hadn’t taken those beginning steps to acknowledge and understand what was happening to me.

And I will never stop wishing that I had done the same for him.

If you know someone struggling, say something. Don’t be afraid to have the conversation. There are no wrong words– if you think someone is suicidal, ask them. Urge them to get help. Remind them that you care.

If you’re looking for a way to help someone today, there are two links to fabulous causes below. The first is for Active Minds, a mental health organization that is extremely dear to my heart, and whose ultimate goal is to change the conversation about mental health, creating a world where no one has to feel alone in his or her struggle.

The second is a link to the Ari Johnson Memorial Scholarship– started by my family, this scholarship will keep  Ari’s memory and impact alive, and will be awarded to a student at Penn who shows dedication to overcoming adversity and disadvantage, including but not limited to the area of mental health challenges and advocacy.

*Disclaimer: This post is not meant to represent the experience or feelings of anyone but myself. I recognize that crawling out of depression and Trump being president are not universally analogous, nor is the comparison relevant to most people out there, especially the people most potentially threatened by his presidency. This is simply a personal, self-indulgent journaling of how I am processing my emotions and looking to stay positive and make sense of things in a time that is overwhelmingly challenging to do so. But mostly, it’s just an ode to a dear friend.

Today I received this email from a dear friend… 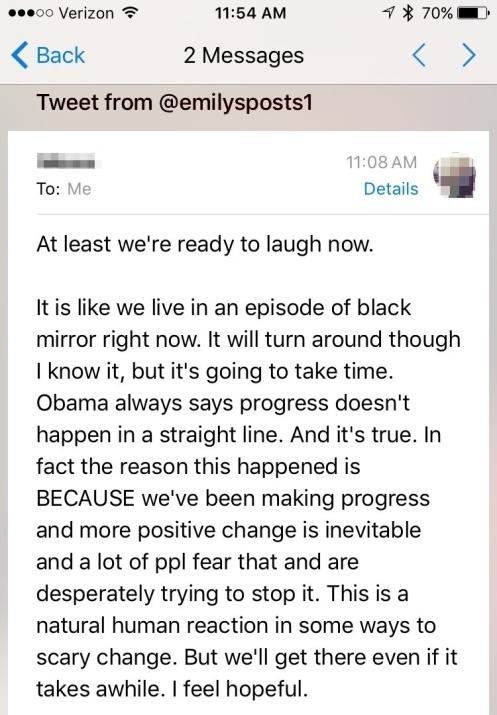 Nine years ago, this same friend came to visit me in my darkest hour. I was living with my parents in Maryland, in the midst of an extremely serious depressive episode. I had left my job and my life in Philadelphia. I was literally sleeping in my parents’ bed, between them, too afraid to be alone with my thoughts. Despair was eating my insides. I couldn’t function, couldn’t eat, could barely breathe. Dressing myself was a challenge. I had lost any semblance of the life I had known and loved, and I saw absolutely no path to getting it back.

And then this friend came in from NY to visit. He dragged me into DC and forced me on a tour of our nation’s capital. And as we sat on the steps of the Lincoln Memorial, he promised me hope.

But this friend insisted on hope. He insisted that progress doesn’t happen in a straight line– but that eventually, we always move forward. He promised me I’d not only get my life back, but this painful experience would, in time, lead to an even better, more connected life than the one I had before.

I protested. He protested back. Eventually, too bone-tired and sad to argue, I nodded. My heart wanted to believe him but my mind told me he was full of shit.

Shortly after his visit, life began to change. It wasn’t instant and it wasn’t easy. It took work. It took a LOT of support from those around me. It took a damn village. It took faith. It took forcing myself into action. It took constantly reminding myself that no matter the setback, everything was going to be ok.

My friend was right. My life is better today than the life I was living before my darkest hour. Not only because I survived the despair, but because I learned from it. It opened my eyes. It gave me perspective. It made me more empathetic. It deepened my connections with others. It inspired me to give back. It forced me to speak out. It sprung me into action, and inspired me to work on myself and stand up for others every chance I get. It made me realize that I have to cherish, appreciate, and look for the good if I want to ensure that darkness will never win in the end.

So thank you, friend. I needed this reminder of hope today. And not because there aren’t other messages of hope out there. There certainly are, thank god.

But you are a source I can trust.

In response to Worse Things, a friend just texted… 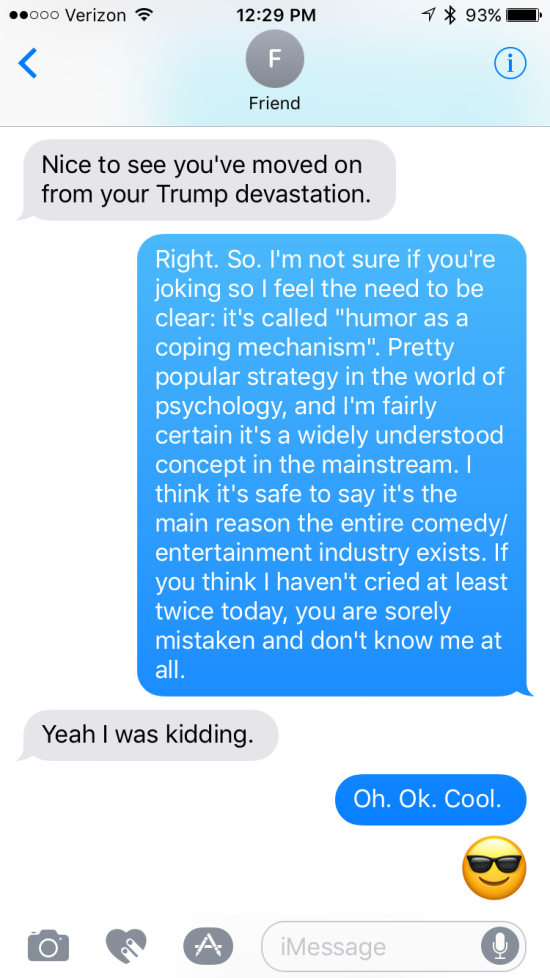 (Part of the Sassy Pedicurist series

It’s been a while since I’ve seen Sassy Pedicurist, as she has been traveling. But don’t you worry, she’s back and more opinionated than ever…

Sassy: “You see a man now?”
Me: “Nope. Still single.”
Sassy: “What happen to man who make you smile in the text?” (referring to the guy in This Is Husband)
Me: “I told you– we’re friends.”
Sassy: “You see this man a lot?”
Me: “Not much lately, actually. We’re in touch, but he’s going through some tough times so hasn’t been feeling very social.”
Sassy: “If this man smart, he know that tough time is better with woman by his side.”
Me: “It’s not like that. He has some stuff he needs to sort through on his own.”
Sassy: “You know good time to sort alone? When you dead. What this man need is to wake up and see woman in front of him.”
Me: “Ok, I’ll be sure to let him know that.”
Sassy: “No– you not SAY this to him.” (shakes head in exasperated disapproval)
Me: “Well, excuse me. Clearly I don’t know the rules.”
Sassy: “Yes. This is very very clear.”